Adaline, the elder of my two granddaughters, turns four next week. One of my favorite things about spending time with her is listening to her and getting to see the world from her perspective.

Adaline has a surprising vocabulary - people who meet her are frequently surprised to learn she's only three - in part because she wants to know the meaning of every new word she hears. On the bus yesterday, she said, "Grandma, do you know what a stampede is?" I said that I did. She nodded and went on to explain it to me. "It's when a lot of animals all start to run togather."

"Yes," I agreed. "Like cows and horses." She nodded vigorously. "And unicorns."

That thought silenced us, as we both smiled, picturing a unicorn stampede.

There was a birthday party for Adaline at pre-school the other day. Her dad and I attended, and we stopped at a playground on our way home. Adaline was busy playing on a new glider swing, when I noticed her watching a girl of about ten playing nearby.

"Grandma," Adaline said. "Did you know my friend Maya is a bigger girl now?" I assumed she meant Maya, like some of her other friends, had moved up to the kindergarten class at school.

The girl who had been playing nearby came over to us. "I'm Maya's big sister," she said. She stayed and chatted with us for a few minutes before going back to play by herself. "My name is Ava," she called back to us.

"She does look a little like Maya," I said.

I love that in her world, seeing an older girl that looks like her friend doesn't necessarily mean that this person is a relative. She didn't see any problem with the idea that Maya just suddenly turned into an eight or ten year old, instead of a three year old. I guess everything is magical at that age.

Adaline and I had a special lunch at the American Girl (Doll) Cafe in Chicago to celebrate her birthday. There was a bowl on the table filled with question cards, in case we needed help keeping a conversation going. One question was, "Would you rather be able to fly or to be invisible?" Adaline didn't hesitate - she wanted to be able to be invisible. "What's your biggest dream?" She did think about this for a minute - I'm not sure she understood the question. Then she smiled. "A horse! Or a unicorn."

I'm kicking myself for not writing down all of her responses. Next time we go there - maybe for her birthday next year? - I'll bring a notepad and pen.

Adaline says something memorable at least once a day, and I try my best to remember her comments. At her school birthday party she explained that it wasn't actually her birthday that day, but she was going to Portland to see her other Grandma on her real birthday. That got all the kids talking about their multiple grandparents. Suddenly Adaline said, "My Grandma Patti isn't feeling very well." She frowned. "And she isn't ever going to get better." Grandma Patti - her great-grandmother, my mom - died on April 9. When some of the kids started asking why she wasn't going to get better, I was curious how she would answer. But another little boy at the table said, "My grandma died, too."

Adaline first heard the word "died" in reference to her family dog, who died last summer after a severe illness. Every once in awhile she'll say, "Winston was my dog, but he died and he isn't ever going to come home again." She says it seriously, but also matter-of-factly. And recently she's begun to add, "And one day we're going to get another dog!"

I have another granddaughter, Diana, who is 15 months old. Her vocabulary is growing - she can now say "bubbles," "cup," "ball" and "thank you" as well as Mama, Daddy, bye-bye, hello, more, no-no-no, kitty and doggie. She's trying to say her big sister's name, too, sometimes calling her "Ada" and sometimes "Ine". It's sad in a way but also exciting to watch these little girls grow up. I'm glad that in another year or two I'll be having interesting conversations with Diana, too.
Posted by Becke Davis at 2:16 PM 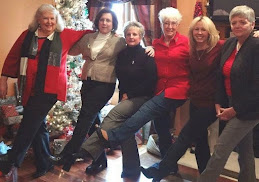 The Can-Can is harder than it looks!